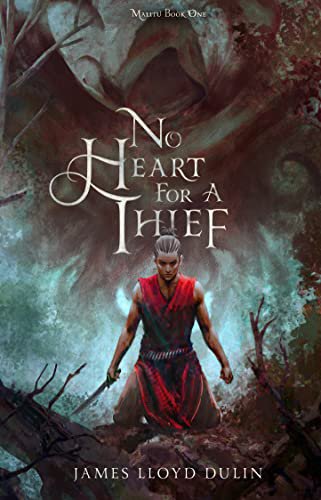 No Heart for a Thief is a great fantasy debut. It's rife with imagery, character, and unique magic without leaning too heavily on one aspect. The novel is well rounded, inviting, and simultaneously heart-wrenching and hopeful.

I found Kaylo and Tayen's budding relationship sweet and light in a world full of discrimination, colonialism, and bloodshed. If you like two overlapping stories wrapped into a single novel, kind of like The Kingkiller Chronicles, I'd recommend giving this one a shot.

James Lloyd Dulin is an emerging author to keep an eye on, and I look forward to reading the rest of the series.

*Disclaimer: I received an ARC from the author in exchange for an honest review.* 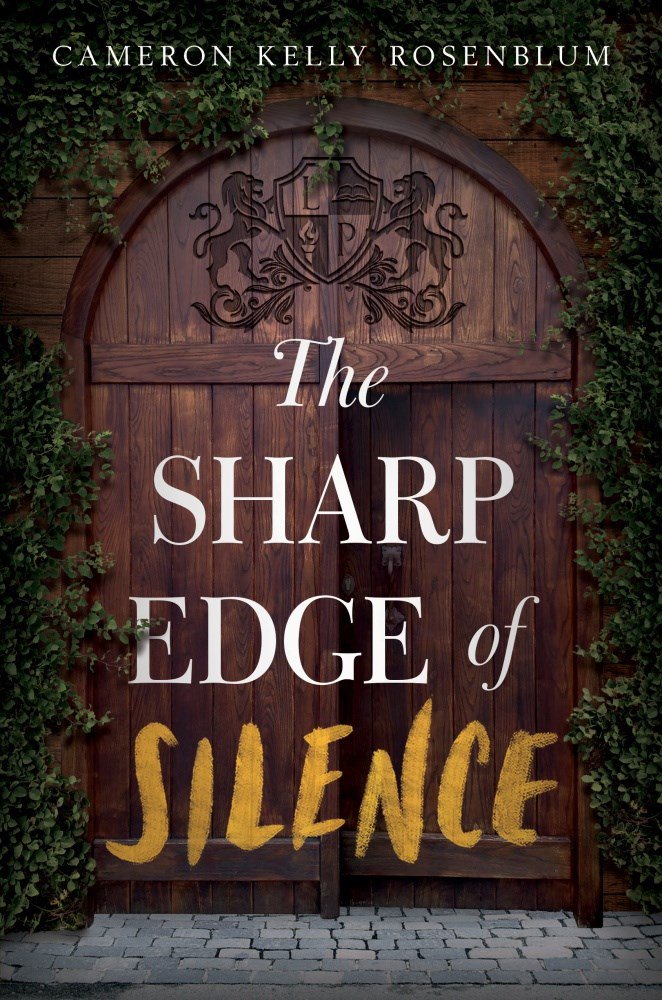 I picked up The Sharp Edge of Silence because of the main plot—a rape at a private high school. As my debut novel, Lipstick Covered Magnet, tackled rape, acceptance, and healing, I knew this book would be for me.

The novel follows three narrators: Q(Quinn), Charlotte, and Max. They each hold a vital piece to the puzzle and offer varying perspectives on the culture (and secret organization) of Lycroft Phelps. As someone who has struggled with sexual harassment and assault, Q's journey and rage sat with me in a way only I believe a fellow victim can understand. Q's story was raw, painful, and honest about living with trauma, and I believe Rosenblum did a phenomenal job conveying the struggles of living through sexual assault and how—until you've healed—your body no longer feels like yours.

While Q's narrative was compelling and important, Charlotte's and Max's felt bloated. I enjoyed their commentary on jock culture and the secretive nature of Slycroft but ultimately felt their sections lagged and only offered something of real importance near the latter quarter of the novel. I also didn't need 20+ pages of Max rowing with the crew. After a while, I began glazing over those scenes.

Overall, I loved Q's plot—from depression to rage to eventual acceptance and healing. I just felt it would have been more poignant and rich without so much commentary from Charlotte and Max.

I recommend this novel to anyone interested in YA novels that tackle sexual assault, healing past traumas, or toxic sexual expectations.

*Thanks to NetGalley and Quill Tree Books for the ARC.* 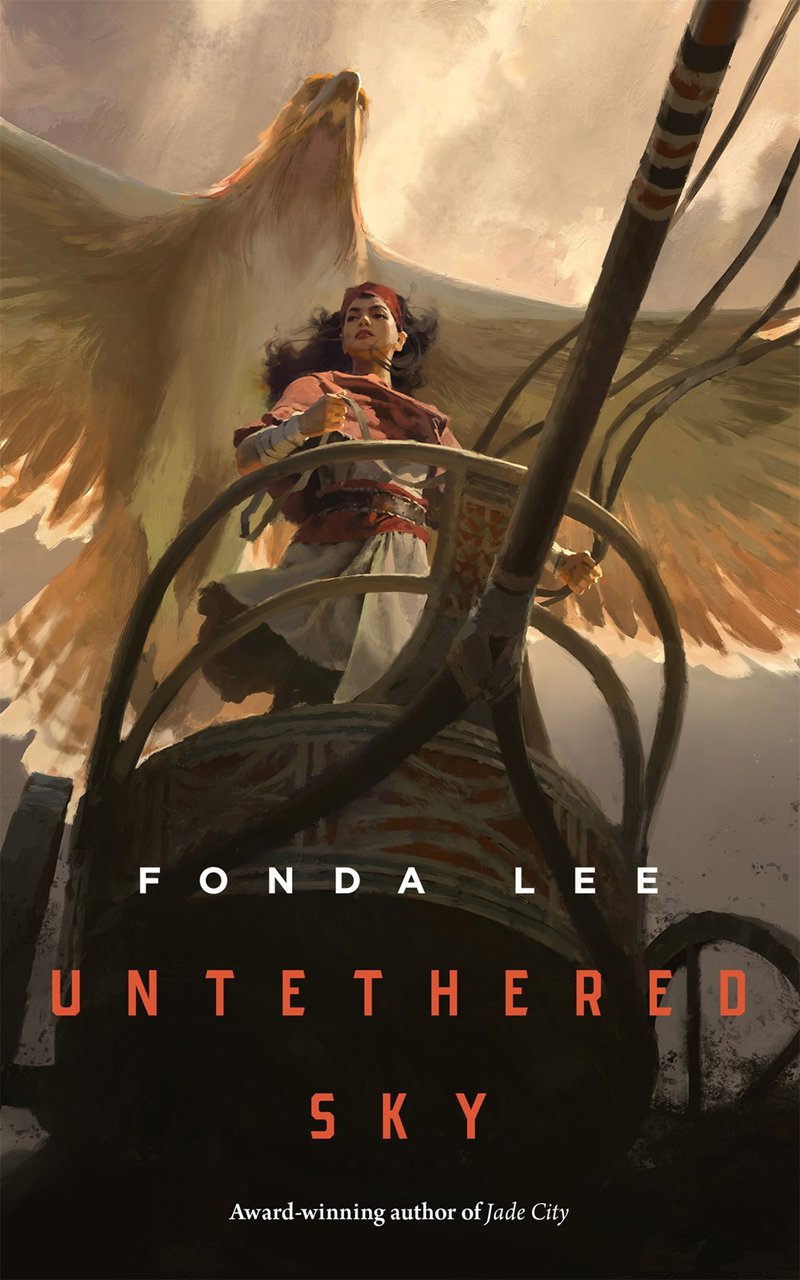 *Thank you to Tordotcom and NetGalley for the ARC.*

Untethered Sky is a story about grief, vengeance, acceptance, and loss. Ester becomes a ruhker (a roc trainer) to avenge her mother and brother's deaths after a manticore attack. It is a tale simultaneously about love and loss and the bittersweet acceptance of a fleeting bond between woman and beast. I didn't believe a story about training and hunting with a large bird would win me over so completely, but I found myself falling in love with Ester and Zahra's story. I adored Lee's prose and can't find a fault in her compelling yet compact novella.

I recommend this to anyone looking for a book about slaying enemies and finding an unflinching love for nature along the way. 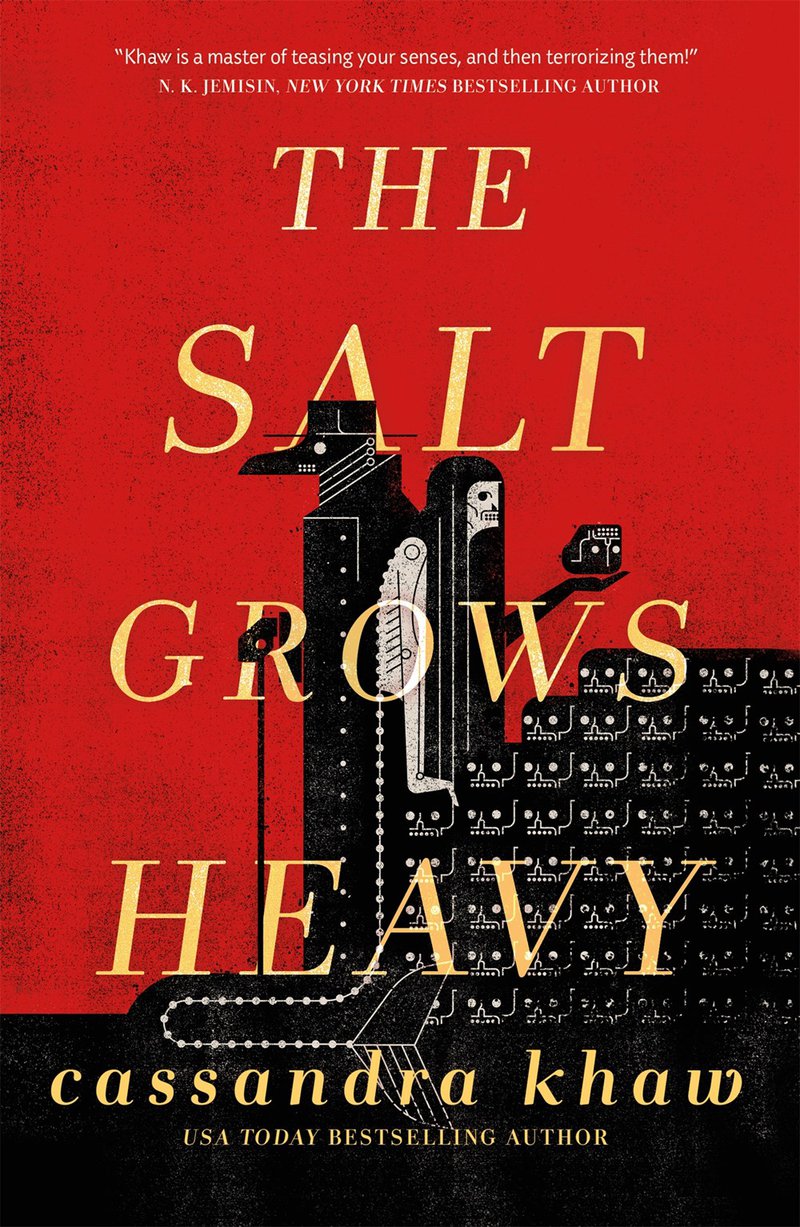 The Salt Grows Heavy is rich with descriptions, gore, and ingenuity. As a story about a murderous mermaid attempting to tear down the cult of three grotesque surgeons, this novella delivers on body manipulation, viscera, and terror. While the prose is luscious, it is also overwrought with high-brow vocabulary that often took me out of the story. While I like the usage of uncommon words, there comes a point where it's a detriment to the story. I also found that, when it came to world-building, there was next to none.

While I believe this would do better in a longer format, I enjoyed the gruesome visuals and romantic undertones. I'd recommend this to anyone looking for a quick and bloody read. 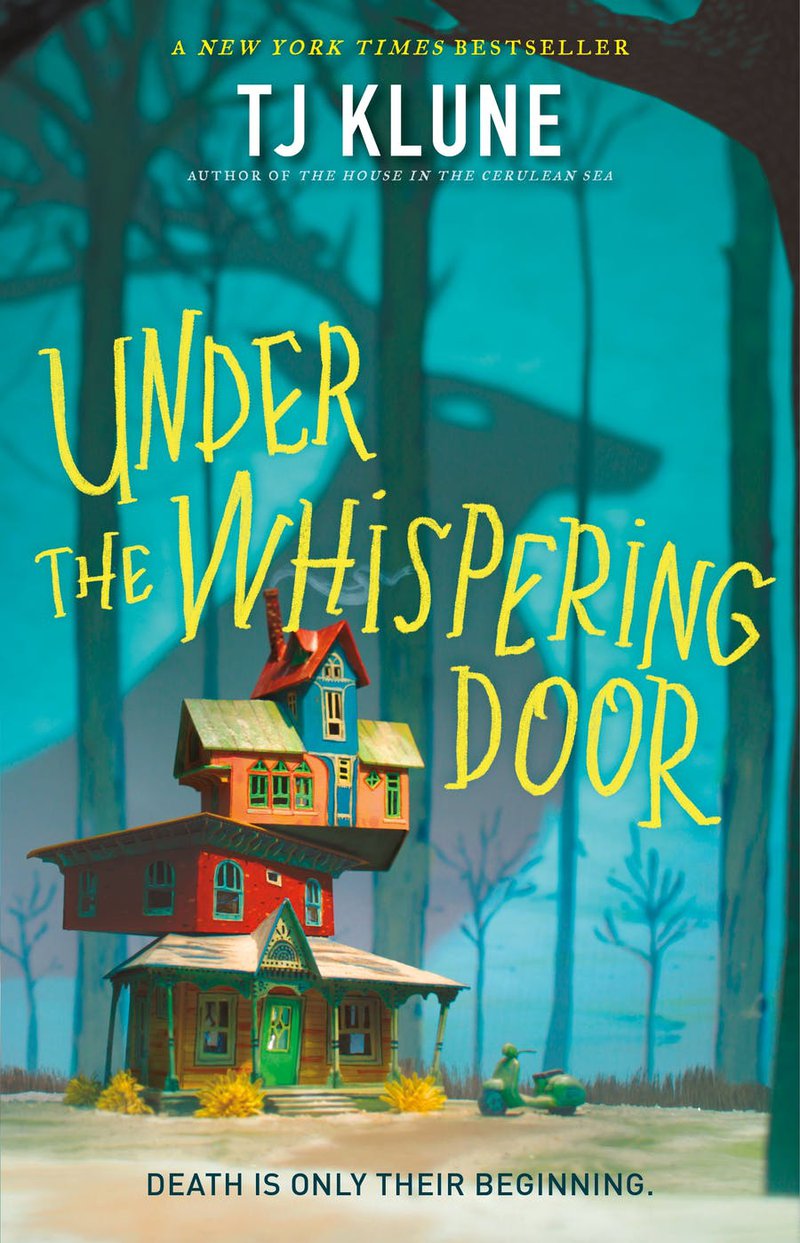 After receiving an ARC for TJ Klune's upcoming novel, In the Lives of Puppets, I wanted to give his first two books a go.

The feel-good, heartfelt novels aren't usually my cup of tea, but this one sounded cute and light—a reprieve from my usually intense, serious, or otherwise grandiose reads.

Under the Whispering Door is hopeful, cozy, and much like a good hug after a cry... but it's also repetitive, saccharine, and obvious. The main message is living life to its fullest because you never know when it'll end. Unfortunately, after Hugo and Wallace share their feelings, and you're left to believe that Wallace must pass through the door the following evening, the Manager (a tight-lipped rule follower) changes his mind because he's bored and resurrects Wallace to see how things play out. (There's a little more context, with the Husks, but that doesn't make this decision any more warranted.) So, the theme—savoring every moment you have—is undermined by the bullshit ending. I get it's a feel-good book, and it's targeted at those who have lost someone close to them, but the ending doesn't make sense when the whole book was leading up to a bittersweet conclusion.

All in all, this book was okay. I'm hoping TJ Klune's other works are more my speed. 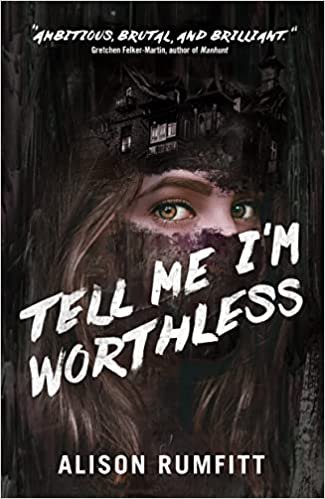 Tell Me I'm Worthless, at its core, is a story about trauma, identity, bigotry, and fascism. The novel follows two women and centers around transgender rights and the politics and ideologies that inevitably come along with it.

While I can only attempt to understand the difficulties in being a trans woman, I found the internal conflicts Alice faced compelling and wrought with emotion. Her raw, and often ugly, truth and unflinching self-awareness gave me insight that I never would have known if it weren't for this book.

My only complaint is that I didn't find the novel scary, at least not in a traditional sense. There is a tone which this novel hits about politics and identity that I can grapple with and understand as a real threat, but the House and its terrors felt alien to me, even if they were strange and grotesque and dripping with body horror. I ultimately finished the novel unsure what truly happened within the House's dilapidated walls.

While it wasn't what I expected, I enjoyed the read and would absolutely pick up another of Rumfitt's books down the line. 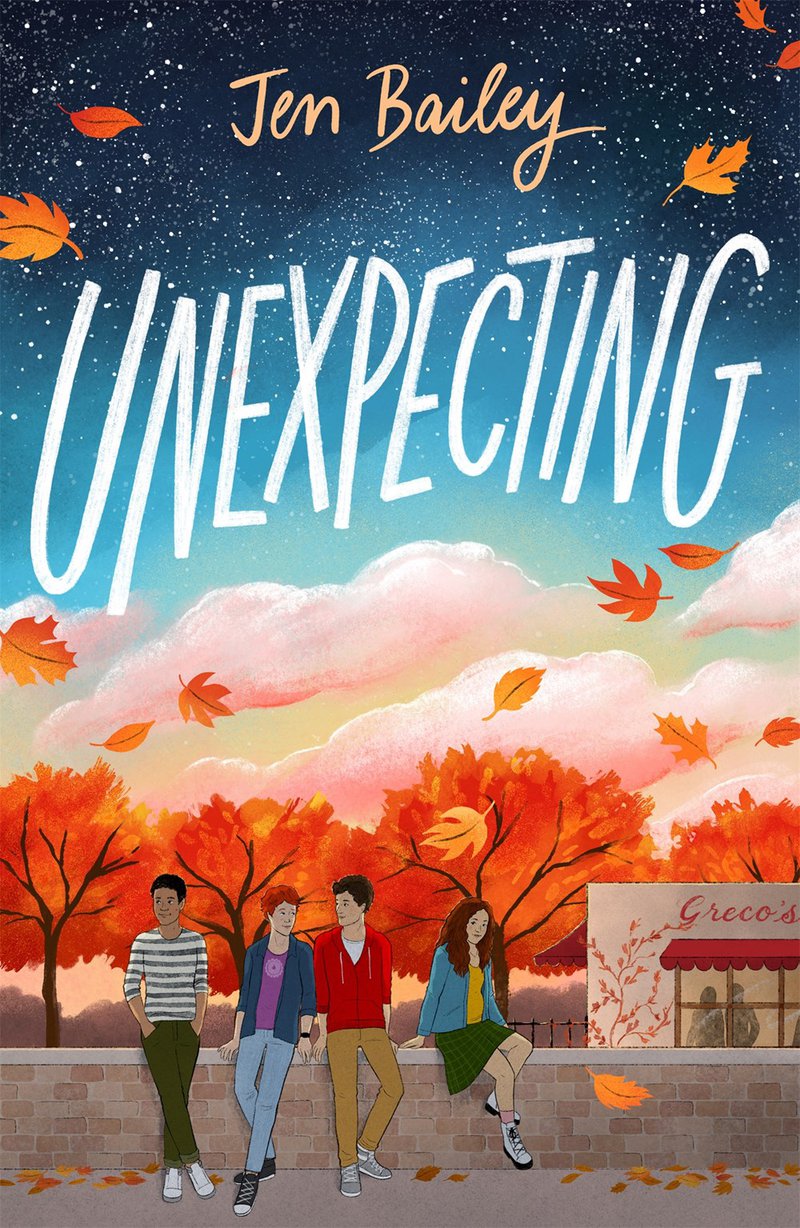 Unexpecting is a YA novel about unplanned pregnancy, expectations, parenthood, and found family. While it is compared to Juno and Heartstopper, it is much closer to the former. There's a budding romance, but you'll be disappointed if you're expecting something reminiscent of Charlie and Nick's relationship.

Ben, the sixteen-year-old gay narrator who gets his best girl pal pregnant after a science camp experiment, is immediately adamant about keeping the baby, despite Maxie's (the mother's) wishes to give it to a couple wishing to adopt. While his intense drive to make young parenthood work, everything seems to stack against him. He lets down his team at the robotics tournament, consistently breaks dishes at his bussing job, and cannot seem to find the time to study on top of enrolling in parenting courses and sitting in on adoption interviews. In many ways, the constant wave of shit makes it unbelievable.

While the prose was written well and Ben was easy to empathize with, some plot points were too over the top, and Ben's drive to be a teenage father didn't make sense halfway through, given how many opportunities and academic programs he would have to give up—things he had been planning for since elementary school. I was also hoping for more when it came to his relationship with Gio.

Despite some of the issues, I thought it was an interesting read. I haven't read many novels about teen pregnancy, and never have I come across one written from the perspective of the expecting father. I commend Bailey for taking on this subject and would readily pick up her future works.

*Thank you to St. Martin's Press, Wednesday Books, and NetGalley for the ARC.* 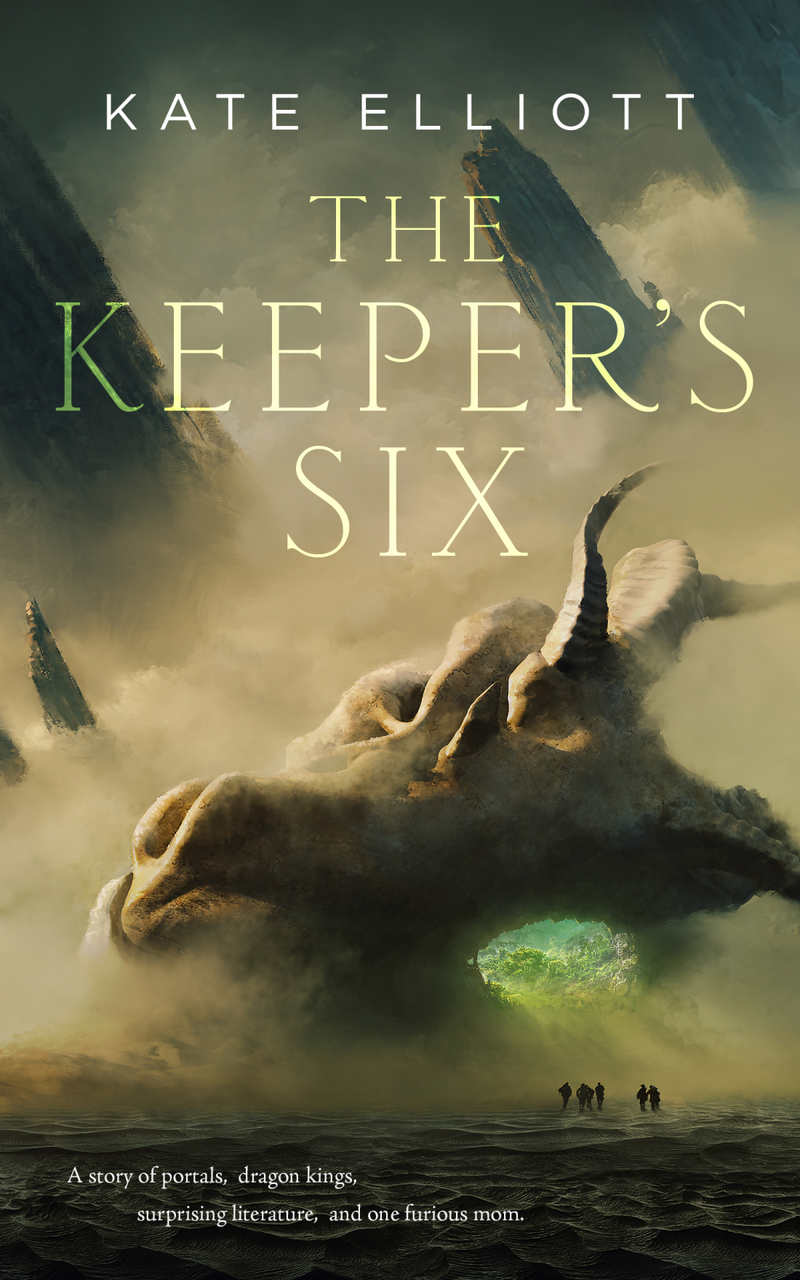 The Keeper's Six is a short read that packs a punch. Simply put, it is about family, righting wrongs, and the willingness to sacrifice yourself for what's right. Throughout the journey, however, there are dragon kings, a multiverse with doors into countless realms, and magic.

Without spoiling anything, this novel is packed with action, interdimensional travel, and unearthly beings while simultaneously offering a heartfelt message.

I recommend picking up a copy (when it comes out on January 17th) if you enjoy fast-paced fantasy romps with a feel-good core.

*Thank you to Tor for the advanced copy.* 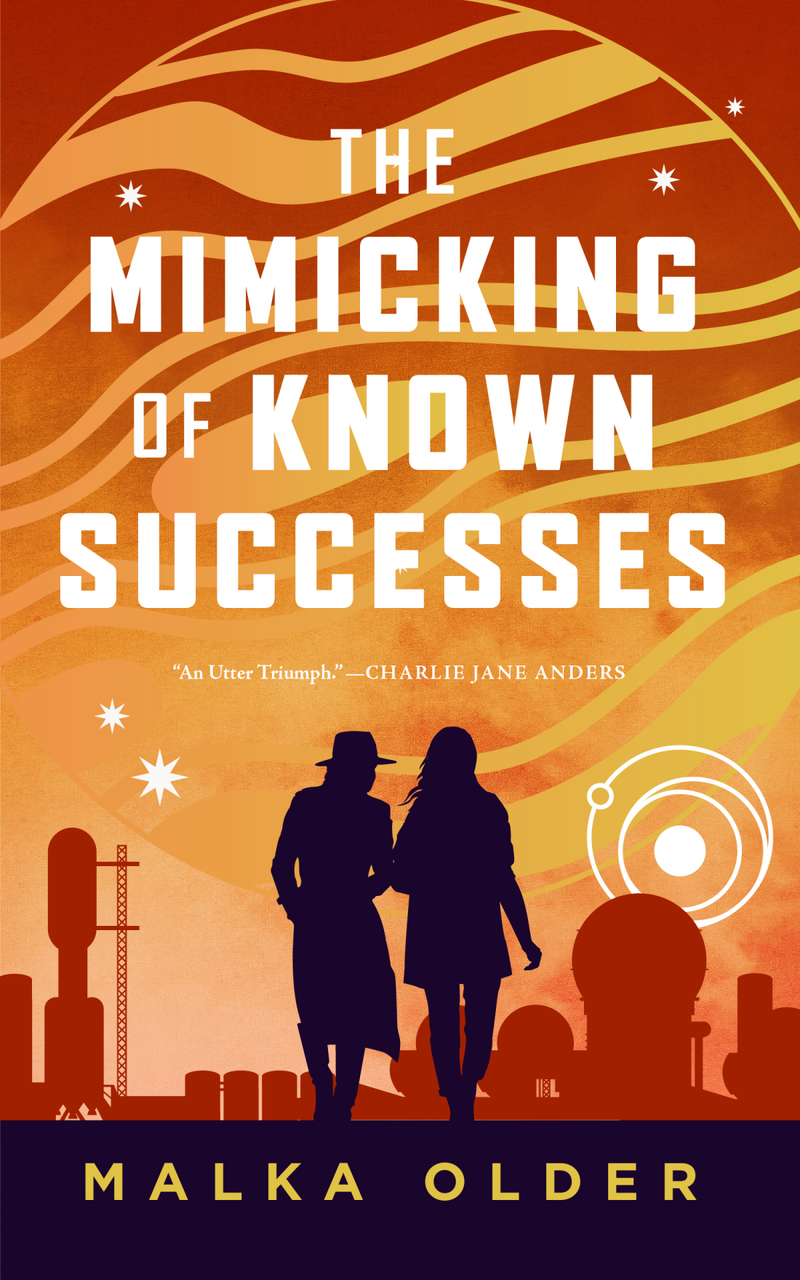 The Mimicking of Known Successes is a mystery novella set on a platform constructed around Jupiter. While the world-building is great, there isn't enough of it. I loved the descriptions of the platforms and how sections and railways are set around the uninhabitable gas giant—not to mention the university's large role in the future reintroduction to life on Earth through meticulously planned ecosystem building. Unfortunately, that was the only thing I really enjoyed about this book and there wasn't enough of it to paint a full picture.

The main plot centers around a mystery regarding a missing person and would could have become of him. Though there are numerous snippets of information thrown at Mossa and Pleiti, most of it seems disconnected, and the ending proves unsatisfying because there aren't breadcrumbs sprinkled throughout the story for the reader to pick up on. If I'm reading a mystery, I don't want to come to the end without having seen it coming. I should at least be able to look back, knowing everything that led up to that point, and stitch clues together. This story did not offer that, and for that reason the ending fell flat.

I also disliked the overstated romance. Mossa and Pleiti's relationship is paper thin, yet the narrator (Pleiti) never lets up about how she wishes Mossa will give her a sign that their relationship—which Pleiti broke off—might be rekindled.

All in all, I believe there was too much going on in this 176-page novella. If it had been novel length, there would have been time to flesh out the world, mystery, and romance.

*Thanks to Tordotcom for the physical ARC.* 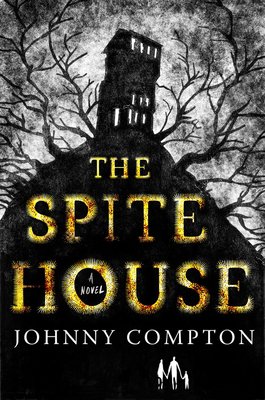 *Thank you to Tor Nightfire for the physical ARC.*

The Spite House is a contemporary horror that takes inspiration from novels like The Haunting at Hill House. It follows the Rosses, a family made up of a father and two daughters, running away from something in their past. It isn't revealed until halfway through what it is they're actually running from. When the father, Eric, lands a job as a groundskeeper for the paranormal-friendly Masson House, secrets are unearthed and many questions about grief, anger, and family debts/grievances are brought forth.

Apart from mildly ominous children spirits and people disappearing, there was nothing to spook me (or any fan of gothic horror). Plenty of truths were sprinkled throughout the novel, and POVs changed nearly every chapter, so any huge questions I had were revealed by the middle of the book. For a "gothic" horror, this was lacking in atmosphere.

Despite my slight disappointment, the book was well done, and I'll definitely be picking up Compton's future works.

This is a great paranormal suspense novel that I'd recommend to anyone who appreciates a good thriller with a supernatural slant.