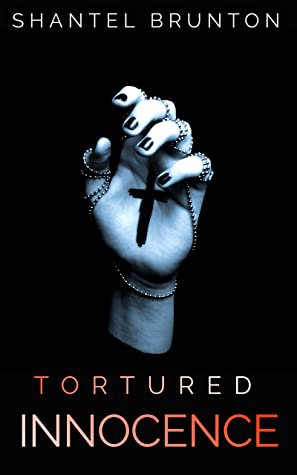 I don't read much body horror, preferring horror stories that focus on atmosphere and psychological aspects over physical pain. Nevertheless, I volunteered to review Tortured Innocence before its August 1st release because the synopsis gripped me.

I had trouble making it through this book. By the first chapter, I knew it wasn't for me but wanted to keep my word and push through. The only thing going for this novel is how unique the plot is, and that's if you can wrap your head around it. I found myself lost in the random scenes of violence; it seemed the nightmares, demonic creatures, and cult were smooshed together only to add more insane scenarios. They didn't work together, instead muddying the weak plot and highlighting the gore porn that makes up a great deal of the first two acts of the book. Given the structure of the sentences, the tone also wasn't right; it sounded more like droning than fear. I was never scared, mostly just lost, surprised by how nonsensical it all was, or bored.

There were multiple gaps in time that didn't make sense; instead of giving attention to some of the more gripping sections of the plot, like Nicole's hospitalization and the two pregnancies in the novel, Brunton breezes past them by skipping over months at a time. This is lazy. If you're so bored by these aspects of the plot, maybe leave them out altogether.

The characters were forgettable and the dialogue didn't sound natural. I understand that some characters are immortal or inhuman, so perhaps they should have different speaking styles, but no one sounded like a real person. Nicole's dad was meant to be worried about her behavior but his speech sounded more nonchalant and detached than afraid for her well-being.

The ending also didn't fit with the rest of the novel. For a book about torture and horror, it should have concluded with something other than a personality 180 from her captor and a marriage ceremony.

To leave off on a positive note, this book might appeal to you if you're looking for something out of the box. If you like descriptive torture scenes, Brunton's contributions are easy to visualize. I wish Shantel Brunton the best with her release, but this book wasn't for me.